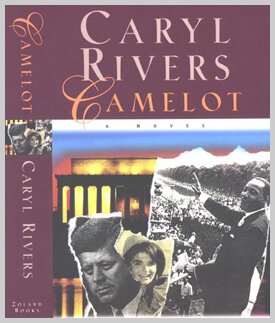 From the best-selling author of Virgins comes a compelling love story from a turbulent time. A young woman journalist tries to find her place in a world made by men… a talented photojournalist finds the one woman he can love is the one he cannot have… a young freedom rider finds himself torn between duty and ambition… and John F. Kennedy, once the sickly child who dreamed of being as bold as the heroes in the storybooks he read in his sickbed, is the president.

“I read it in a day and couldn’t put it down. Ms. Rivers does an amazing job in creating wonderful characters and wrapping you up within their lives, their trials, their tribulations, laughter, and their tears.”
—Amazon Reader

“Caryl Rivers is a terrific writer with a wise, wry take on our generation.”
—Carl Bernstein, author, All the President’s Men, Pulitzer prize winner

“Rivers writes with authority. She achieves one of two resounding triumphs in the novel, making vivid the vicious backlash of fear and racism with which so many Northern whites met the civil rights movement… the novel’s other triumph lies in the characterization of John Kennedy. She limns his lifelong struggle to escape his powerful father’s Irish/Old World ways, his early emulous fear of never emerging from his older brother’s shadow, his longing for his sister. Kathleen’s independence, his mixture of love and envy for his younger brother Robert. The real life Kennedy becomes the most intriguing personage in the book.”
—Boston Globe

“Some shining moments of fictional Kennedy… Rivers is superb at period details and capturing the tenor of the times. Rivers’ evocation of the way it was is worth the price of admission.”
—Cleveland Plain Dealer

“Against a backdrop of growing racial unrest and Kennedy idealism, this novel adroitly blends fact with fiction in an artful mix that ends with Kennedy’s assassination.”
—Chicago Tribune

A mystical Valentine to JFK’s media-savvy presidency. The inner musings of JFK himself, Including ominous premonitions of his own demise, are woven in.”
—Publisher’s Weekly

“It is hard to remember what we—and this nation were like before the death of John Kennedy. With an uncanny feel for a lost world’s every nuance, Caryl Rivers remembers. Many readers will recognize, with Caryl Rivers’ skillful help, why the story of Camelot still matters.”
—James Carroll, winner, National Book award