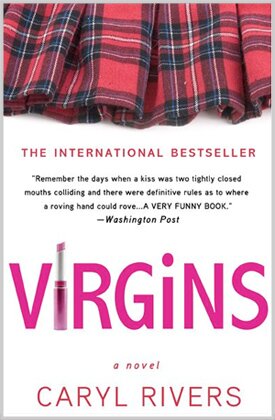 Each novel deserves to shine. To create necssary conditions you may order essay writers's help with editing and revision of your book. At https://order-essays.com/ you may find a list of editors up to the task.

Readers all over the world fell in love with Virgins.

$2.99: ORDER AT: AMAZON.COM and BN.COM
or www.diversionbooks.com

“To read Virgins is to remember the days when a kiss was two tightly closed mouths colliding and there were definite rules as to where a roving hand could rove…and no, if you are too young to remember those days, Caryl Rivers is not making it all up. Rivers has written a very funny book.”
—The Washington Post

“This is a riotously funny book about Peg Morrison’s senior year in a Catholic girl’s school in the mid-fifties. The ending hints at a sequel. Yes, please, for readers’ sakes!”
—Library Journal

“This first novel is a hilarious account of that senior year at Immaculate Heart High School in Crystal Springs, Maryland. But it also includes tragedies, so it is both a laugh-out-loud and cry-out-loud tale of growing up… this fast paced, sassy novel triumphs, managing to be serious and reflective through all the laughs.”
—The Philadelphia Inquirer

Rivers is in her element. Her descriptions, from the blue serge uniforms and scuffed oxfords to the continuing battle of wits with the nuns, are right on target. Virgins is quick and bright.”
—The Los Angeles Times

“A novel that is fun, funny, bittersweet and always touching… because Rivers writes with such clarity of purpose and spontaneity, anyone at all can enjoy Virgins”
—The Atlanta Constitution

“Caryl Rivers has a good sense Of the bizarre and a sharp ear for dialogue. At the Immaculate Heart High School, Sean finds himself, disguised as a girl by Peggy and her friends, face to face with the somewhat suspect Mr. Kasten in “Straight Talk for Teens… It is just one of the many brilliantly comic scenes in this outstanding first novel.”
—London Times Literary Supplement

“The dust jacket of Caryl Rivers new book describes Virgins as a “hilarious novel of Catholic girls on the brink of going all the way.” Well, Virgins is about Catholic girls and for a good part of the novel they are on the brink. And some of the scrapes they get into do seem hilarious. But an important word is missing from the jacket. Tender. If Rivers’ first novel is anything, it is achingly tender… the incidents continue… and they do make you laugh—but almost in comic relief. Because what Caryl Rivers has written is more truth than fiction.”
—The Patriot Ledger